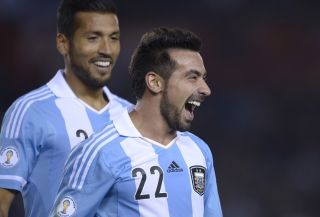 The CONMEBOL World Cup qualifying leaders, who have already secured a spot at Brazil 2014, fell behind to Claudio Pizarro's fine finish for Peru in the first half.

But thanks to Ezequiel Lavezzi's brace before half-time and Rodrigo Palacio's strike two minutes after the break, Argentina made it nine games without a loss in home qualifiers.

The win ensured Argentina will finish the South American qualifying group on top as they rose to 32 points, five clear of second-placed Colombia, who wrapped up a spot at next year's finals on Friday.

Peru had entered the match in Buenos Aires knowing they could not qualify for Brazil 2014 and finished the game still on 14 points in seventh position.

The visitors started strongly, however, with Pizarro bursting onto a through-ball by Gianmarco Gambetta in the 21st minute and then finishing inside the far post of Sergio Romero's goal.

Peru's joy did not last long though as Lavezzi equalised two minutes later, tapping home from close range after Federico Fernandez's header from a corner was saved.

The Paris Saint-Germain striker put Argentina ahead in the 35th minute, after a flowing move down the right ended with Palacio cutting the ball back from the byline and Lavezzi had no trouble side-footing into the net.

Argentina almost had a third goal just before half-time as Sergio Aguero hit the back of the net only to be ruled out for offside.

Coach Alejandro Sabella and his Argentine players did not have to wait much longer to make it 3-1, however, with Aguero linking up with Marcos Rojo in the 47th minute and the latter crossed for Palacio to finish from close range.

Palacio hit the bar soon after with a delicate chip but the home side failed to add to their tally, while Peru were barely in the contest as they copped their fourth loss in five international matches.