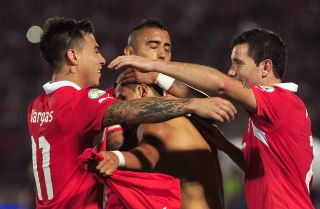 Goals to Alexis Sanchez and Gary Medel saw Chile lead 2-0 at half-time in front of their home crowd and the hosts looked set to destroy Ecuador's World Cup qualifying hopes as they dominated the early stages of the second half.

But a goal on the break from Felipe Caicedo saw Ecuador reduce the margin after the hour-mark and ensured qualification for the Ecuadorians, as they claimed a berth at next year's tournament in Brazil thanks to a superior goal difference to Uruguay.

Having just missed out on securing a spot at Brazil 2014 on Friday when they gave up a three-goal lead to draw with Colombia, Chile seemed inspired and started the strongest at the Estadio Nacional Julio Martinez Pradanos in Santiago.

In just the fourth minute, a neat one-two between Sanchez and Arturo Vidal saw the former's shot deflected out for a corner and from the resultant set-piece, Marcos Gonzalez got free but headed over the bar.

Ecuador's first shot on goal came in the 10th minute with Christian Noboa's free-kick was palmed away by Chile's goalkeeper Claudio Bravo and that seemed to spark the visitors, who looked dangerous on the counter-attack for the rest of the opening half.

Jorge Valdivia twice went close to opening the scoring for the hosts in the opening half-hour, with a last-ditch tackle denying the Palmeiras midfielder on the quarter-hour mark, before he curled another shot just wide of the top corner.

Chile broke through soon after, however, when Sanchez headed home at the near post from Eugenio Mena's driven cross in the 35th minute.

Ecuador barely had time to react before it was 2-0 with Sanchez seeing his free-kick tipped over by Alexander Dominguez but the Barcelona attacker had the last laugh, flicking on the resultant 38th-minute corner for Medel to tap the ball into the net from close range.

With goal difference critical to which team out of Ecuador and Uruguay claimed the fourth automatic qualification berth, Reinaldo Rueda's Ecuadorians would have been relieved to see Chile spurn two glorious scoring opportunities early in the second half.

In the 52nd minute, Vidal's header from a corner cannoned off the post and landed in the arms of a flat-footed Dominguez, while on the hour-mark, Eduardo Vargas shot over the bar when clear through on goal.

Ecuador took advantage of those misses six minutes later on yet another rapid counter-attack with captain Antonio Valencia releasing Caicedo, who placed his shot through Bravo's legs to make it 2-1, and from then on, both teams seemed fairly happy with the result.

Chile secured third spot in CONMEBOL's standings with 28 points, while Ecuador claimed the fourth automatic qualifying berth with 25 points and a goal-difference of plus four.

Uruguay, who defeated top team Argentina 3-2, finished with 25 points and a neutral goal difference, and face one more hurdle to qualify for Brazil 2014 – a two-legged intercontinental play-off against Jordan.