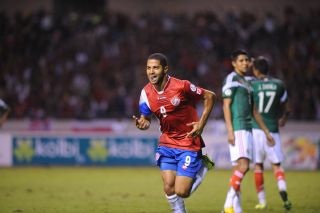 Manuel Vucetich's Mexico side looked set to miss their first World Cup finals in 24 years as Panama, their rivals for the intercontinental play-off berth against New Zealand, took a crucial lead over the United States.

But Mexico's arch-rivals, the USA, did them a favour, scoring twice in second-half injury-time to stun Panama 3-2 and ensure the loss in Costa Rica did not matter for Vucetich's team.

The results on the final matchday of CONCACAF's fourth round of World Cup qualifying saw Mexico finish with 11 points in fourth position, three clear of Panama, who would have earned the play-off berth on goals scored if they had defeated the USA.

The match at the Estadio Nacional de Costa Rica began in scrappy fashion with neither team fashioning a genuine chance on goal in the opening quarter of an hour.

But Mexico were in danger of missing out on the World Cup for the first time since 1990 and that knowledge seemed to spark the visitors, who were denied a goal in unusual circumstances after 17 minutes.

A great move through midfield saw Carlos Pena slide a pass to Oribe Peralta on the right side of the box and the striker squared the ball to Javier Hernandez, who scuffed his shot towards goal.

With Costa Rica's goalkeeper Keilor Navas stranded, Hernandez's effort rolled slowly towards the goal-line but Peralta, who was offside, looked set to slam the ball into the net before thinking better of it, letting it through his legs to nestle in the corner of the net.

Despite Peralta having not touched the ball, the referee whistled for offside.

The visitors were denied again soon after with Pena's shot blocked by a diving Costa Rica defender, before the hosts dealt Mexico a blow in the 25th minute when Bryan Ruiz slammed home the opening goal after spinning away from two defenders.

With Panama taking the lead over the USA in the other crucial CONCACAF qualifier, Mexico were in trouble but equalised quickly when Peralta thumped a loose ball into the net off the underside of the crossbar after Navas had denied Hernandez.

Mexico dominated the rest of the half but failed to convert and that lack of cutting edge came back to haunt them in the 65th minute when Cristian Gamboa's cross found Alvaro Saborio unmarked in the penalty area and the Real Salt Lake striker made no mistake with his header.

Almost immediately, Costa Rica goalkeeper Guillermo Ochoa palmed away Raul Jimenez's header as Mexico searched for another equaliser, although they seemed safe as the USA equalised in Panama.

Costa Rica then hit the post as Cristian Bolanos played a one-two with Saborio but could only dink his shot onto the woodwork and the ball bounced out.

With around seven minutes remaining, Panama moved 2-1 ahead of USA but Mexico failed to respond and were on the verge of elimination until two late goals by the Americans ensured Vucetich's team will play New Zealand in a two-legged play-off in November.

Meanwhile, Honduras confirmed their place at Brazil 2014 despite playing out a disappointing 2-2 draw at last-placed and winless Jamaica.