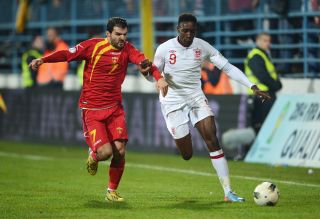 The two sides are only separated by one point at the top of their qualifying group, with Ukraine also in the running.

A Montenegrin victory would mean that the outcome of the group would be decided on the final round of games on Tuesday, when England take on a Poland side who could still harbour hopes of qualification themselves.

But a win for England, and defeat for Ukraine in Poland, would leave Roy Hodgson's men in a position of strength, with their goal difference so much stronger than Poland's.

However, England have never beaten Montenegro since they became a nation in their own right in 2007 – all three fixtures have ended in draws – and in their only meeting at Wembley it ended goalless.

In their first showdown in the group the match ended 1-1, with Wayne Rooney scoring early for England only for Dejan Damjanovic to level with 14 minutes to play.

With the group poised so delicately, neither side can afford to lose the game but with the potential prize for the winner being so huge, they can scarcely afford to play for a draw.

Should England qualify it would be their 14th appearance at the finals, while Montenegro are eyeing their debut on football's biggest stage.

Hodgson's side have not lost a competitive fixture since they were beaten by Germany in Bloemfontein in 2010, although they were eliminated from Euro 2012 on penalties after a goalless draw in their quarter-final clash.

Montenegro have not won any of their last four matches, but only one of those ended in defeat – 4-0 against Ukraine in June – and coach Branko Brnovic remains confident heading to London.

"We can do it," he said. "We have the quality and this team play much better away than home.

"I believe that my players do not need any special motivation for such games, because to play against the great England team at Wembley is something that every player dreams about."

The 46-year-old has every right to be in bullish mood, given that his side have won three of their four away matches in the group – the fourth ended in a draw – and have scored nine goals on their travels while only conceding one.