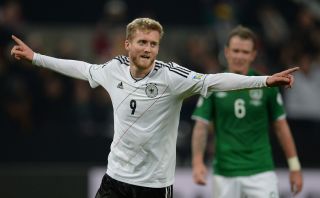 Goals from Sami Khedira and Andre Schurrle and an injury-time Mesut Ozil strike earned Joachim Low's side their place at the showpiece as the winners of Group C with a game to spare.

In the process they also ended Ireland's slim qualification hopes.

Experienced midfielder Bastian Schweinsteiger returned for the hosts after a near seven-month international absence, while Ozil won his 50th cap.

In his first game since being appointed Ireland's interim boss, Noel King made Seamus Coleman captain on his 25th birthday with regular skipper, record cap holder and all-time leading goalscorer Robbie Keane taking his place among the substitutes.

After a quiet opening, Khedira gave Germany the lead in the 12th minute.

Philipp Lahm picked off Anthony Stokes' pass deep inside the Irish half and fed Khedira, whose weak shot took a wicked deflection off Ciaran Clark and rolled past the wrong-footed David Forde in the Ireland goal.

Thomas Muller was next to threaten in the 37th minute, driving infield before unleashing a left-footed shot that Forde tipped over, diving full stretch to his right.

But for all Germany’s possession, the visitors almost equalised in first-half stoppage time when Clark headed onto the crossbar, before Stokes swung wildly at the rebound from six yards and made no contact.

The Celtic striker was involved twice more in the first minute of the second period, firing just wide from outside the box before seeing his mishit cross tipped over the crossbar by Manuel Neuer.

The second half proved much more open than the first and Schurrle was the next to go close in the 55th minute, curling the ball wide of the right-hand post after a surging run down the left.

Two minutes later however, the Chelsea midfielder did find the net, collecting Toni Kroos' chipped pass before spinning on the ball inside the area and firing low beyond Forde with his left foot.

The momentum was firmly with the home side now, and Forde did brilliantly to tip away Schweinsteiger's curling effort from the edge of the box on the hour mark, before denying Muller at the back post 10 minutes later.

The visitors responded with an attack of their own as Neuer pulled off a double save to deny Stokes and then Coleman but Forde was repeatedly called into action at the other end and tipped away Kroos' low drive and Khedira's curler, before Jerome Boateng rattled the angle of post and crossbar from 30 yards in the 83rd minute.

Ozil then fired wide with five minutes to go before finally finding his range in injury time, lifting the ball over Forde after running onto Kroos' throughball to confirm Germany's place in Brazil.