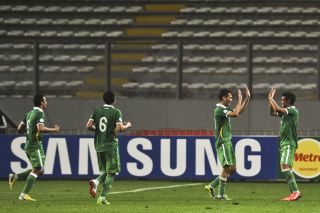 With neither team at the Estadio Nacional de Lima still in contention for World Cup qualification heading into Tuesday's match, the game generally lacked intensity with both goals scored in the first half.

Vasco da Gama winger Victor Yotun put Peru ahead in the 19th minute with a strong run down the left before he shot across Bolivia goalkeeper Romel Quinonez to see the ball settle inside the far post.

But in first-half stoppage time, Diego Bejarano equalised for the visitors, smashing a loose ball in off the post after Marcelo Martins Moreno's shot was pushed away by Diego Alonso Penny.

Bolivia had started the qualifier in Peru at the bottom of South America's World Cup qualifying standings, while the hosts sat seventh, too far back to catch fifth-placed Uruguay, who will play a two-legged intercontinental play-off against Jordan for a spot at Brazil 2014.

The lack of meaning to the match and an empty stadium in Lima, due to previous crowd trouble, ensured a lacklustre second half, although Yordy Reyna almost scored the winner for Peru when he hit the bar in the 86th minute after a through ball from Claudio Pizarro.

The draw saw Peru end a three-game losing streak, while Bolivia picked up their second consecutive stalemate after a 1-1 result at home against Ecuador last month.