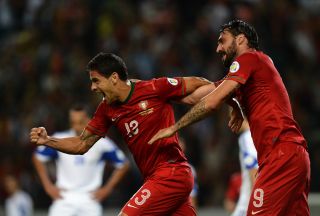 Ricardo Costa opened the scoring for the hosts at the Estadio Jose Alvalade with a close-range finish in the sixth minute.

But a late error from keeper Rui Patricio threw two points away for Portugal, as he hit an attempted clearance straight to Ben Basat in the 85th minute before the striker coolly applied the finish.

Hugo Almeida thought he had put the home side 2-0 ahead with a back-post header shortly after the break, but his celebrations were cut short by the offside flag.

The result means Paulo Bento's side trail Russia by three points ahead of their final Group F fixture with Luxembourg on Tuesday.

Bento named an attacking line-up that included Cristiano Ronaldo, Joao Moutinho and Nani, while Israel were without striker Tomer Hemed due to a knee injury.

Portugal looked to attack right from the off and Ruben Micael drove an effort wide from Hugo Almeida's deft header as early as the fourth minute.

But Israel nearly caught the hosts on the counter-attack when Andre Almeida missed an interception, allowing Ben Basat to take the ball before he dragged his shot wide of Rui Patricio's goal.

The hosts hit back though, and Micael once again went close in the 26th minute. Nani bundled his way across the midfield before the ball fell kindly for the midfielder, whose snapshot was tipped over the bar by Dudu Aouate.

However, Portugal did not have to wait long to take a deserved lead, when Pepe cushioned a deep cross back across the six-yard box and Costa got down low to head his team in front.

The goal appeared to ease the pressure on Bento’s men as they pressed for a second, with Nani's cross narrowly evading the head of Ronaldo six minutes before the break.

And Portugal started the second half in similar fashion with plenty of attacking intent, although the visitors had a good opportunity to level the scores five minutes after half-time.

Defender Omri Ben Harush cut inside Costa but showed a lack of composure to strike tamely at Patricio.

The home crowd believed the lead had been extended in the 55th minute, only to see Almeida’s header from Antunes’ deep cross ruled out.

Costa should have had a second when he found himself unmarked in the six-yard area from a corner, but the ball bounced over the bar after the Valencia defender headed into the ground.

Nelson Oliveira then chipped wide when a simple pass to Ronaldo appeared to be the better option after an incisive Portugal break.

And they were punished with just five minutes remaining when Patricio's blunder gifted Ben Basat the leveller.

Portugal now must win their final game convincingly, while hoping Russia lose heavily away to Azerbaijan, to qualify automatically for Brazil 2014.