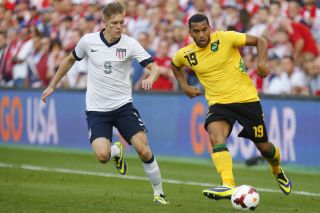 In a dull contest at Sporting Park in Kansas City, the home side had to wait until the final quarter of an hour to break down Jamaica with Graham Zusi and Jozy Altidore scoring within four minutes of each other to wrap up victory for the USA.

The result of Friday's World Cup qualifier was basically irrelevant as the USA had already qualified for next year's tournament in Brazil, while Jamaica had no chance of qualifying.

And the game seemed to reflect that for the opening 70 minutes with a lack of urgency meaning there were only four shots that tested either goalkeeper in that time.

But it was not until Johannson was substituted that the hosts finally hit the back of the net with Zusi finishing off a nice cutback by Alejandro Bedoya in the 77th minute.

The Americans then opened up Jamaica's defence in the 81st minute with Edgar Castillo getting free on the left-hand side to set up Altidore for a simple tap in from close range.

The victory continued the USA's incredible run of form that stretches back to June, while Jamaica suffered their fifth defeat in seven World Cup qualifiers.