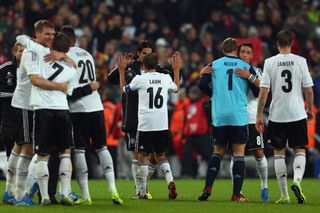 Joachim Low's Germany – who finished third at the 2010 World Cup in South Africa – booked their place in Brazil with a classy 3-0 triumph over the Republic of Ireland in Cologne.

Sami Khedira's deflected strike put Germany in front after just 12 minutes before second-half goals from Andre Schurrle and Mesut Ozil capped off the victory to see them progress as the winners of Group C, giving them their eighth win in nine qualifiers.

Meanwhile, Romelu Lukaku scored twice as Belgium defeated Croatia 2-1 in Zagreb to confirm their position at the top of Group A.

The Everton forward struck in the 15th and 38th minutes and despite Niko Kranjcar coming off the bench to pull one back with six minutes to play, Marc Wilmots' men held on for all three points.

Switzerland were the other side to secure their qualification after a 2-1 win away to Albania in Group E.

After a goalless first half, Xherdan Shaqiri's 48th-minute effort set Switzerland on their way before Michael Lang doubled their advantage with 13 minutes left.

Hamdi Salihi scored a late effort from the penalty spot but it was in vain as Switzerland extended their unbeaten record to 13 matches in all competitions.

Reigning world champions Spain need just one point against Georgia in Albacete on Tuesday to guarantee qualification after edging their way past Belarus 2-1 in Group I.

After a dull first half, strikes from Xavi and Alvaro Negredo helped Spain to victory, although they received a late scare when Sergey Kornilenko scored in the 89th minute for Belarus.

It was a record-breaking evening for Robin van Persie in Eindhoven as the Manchester United striker netted a hat-trick to become Netherlands' all-time record goalscorer as they thrashed Hungary 8-1 in Group D.

Van Persie – who now has 41 goals for his country – saw his treble added to by Kevin Strootman, Jeremain Lens, Rafael van der Vaart and Arjen Robben, as well as a Szilard Devecseri own goal, while Balazs Dzsudzsak added Hungary's consolation from the penalty spot.

England moved a step closer to securing their spot in Brazil with a 4-1 Group H win over Montenegro at Wembley, as Wayne Rooney, Andros Townsend and Daniel Sturridge all scored for the hosts, who were also gifted a Branko Boskovic own goal.

And in Copenhagen, Alberto Aquilani's stoppage-time equaliser helped Italy to a 2-2 draw against Denmark in Group B, while Armenia's 2-1 win over Bulgaria and the Czech Republic's 4-1 triumph in Malta set up a thrilling finale in the same group in the battle for the play-off spot.

Portugal were held to a 1-1 draw against Israel after Eden Ben Basat scored a late equaliser, while Russia thrashed Luxembourg 4-0 in Group F to keep them in pole position to finish first.

Group D also has several permutations heading into the final day, with Turkey's 2-0 win over Estonia and Romania's 4-0 success against Andorra meaning three sides could finish in second place.

Bosnia-Herzegovina thrashed Liechtenstein 4-1 as Edin Dzeko – the leading scorer in UEFA qualifying – netted twice to take his tally to 10 in the campaign, while Slovenia beat Norway 3-0 and Wales defeated Macedonia 1-0.