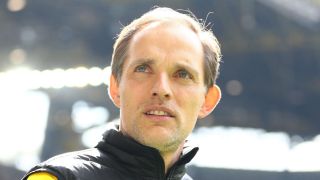 Borussia Dortmund CEO Hans-Joachim Watzke has underlined the importance of the club finishing at least third in the Bundesliga as he prepares to enter contract talks with head coach Thomas Tuchel.

Dortmund were fourth ahead of Saturday's crucial home game against third-placed Hoffenheim, after which Tuchel's side have just two more games to ensure they finish in the top three and qualify automatically for next season's Champions League.

Watzke said Tuchel's response to the attack on the team bus ahead of the first leg of Dortmund's Champions League quarter-final against Monaco would also figure in the discussions over an extension of his contract, which expires in June 2018.

"As always with talks, things are not only about the sporting aspect, but also about strategy, communication and trust," Watzke told reporters.

"The final table is like a testimony, and the score is certainly better if you are third, instead of fourth.

"I will also assess everything relating to the terrorist attack, of course, against the background of what we have discussed intimately with each other and what was possible."

Tuchel was critical of UEFA's decision to reschedule Dortmund's game against Monaco for the following day without consulting the club's management or playing staff, but Watzke said he didn't share the coach's view of the situation.

When asked whether there was a disagreement between the two men over the way the matter was handled, Watzke said: "That's the way it is, yes."