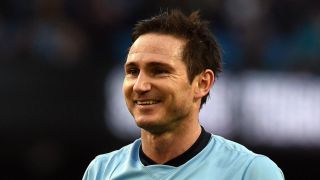 New York City star Frank Lampard said fitness is behind his return to form after the former England international continued his goalscoring run in MLS.

The 38-year-old's 14th-minute strike made it four goals in five matches, having only managed three in his first 13 appearances due to injury, mainly a calf problem, which had led to scathing criticism from some supporters.

"The team's been playing well and we've been creating chances. A lot of chances and I've been fortunate enough to score some.

"You're happy when you win. But even when you score, if you don't win, as a gruesome person, I'm not very happy with that."

New York City, though, remain atop the east by a point, albeit playing an extra match.

"We have to remember what made us win four games recently, back-to-back," added Lampard, who played 63 minutes in Kansas City.

"We'll take out the negatives today and look back at the game a bit and realize that if we drop our standards, we're going to lose games. That's the nature of the MLS. You get punished.

"So it's about picking ourselves up. Getting back to New York, working hard and looking forward to the game at the weekend."