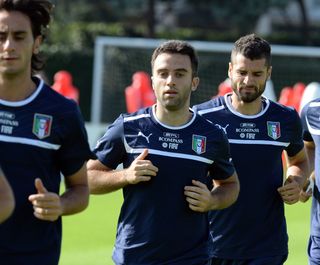 Rossi, 26, is getting his career back on track at Fiorentina after twice sustaining serious knee injuries during his time at Villarreal.

The striker is involved with his country for the first time in two years after an impressive start at his new club, which has seen him score six goals in seven Serie A matches.

And the United States-born forward has been rewarded by Italy coach Cesare Prandelli with a call-up for the World Cup qualifiers against Denmark on Friday and Armenia next Tuesday.

Italy have already qualified for Brazil 2014 and, although Rossi is eager to play on the biggest stage of all next year, he is not getting ahead of himself.

"I have a long path to follow with the national team and Fiorentina. I believe this is the right mentality. I'll think about the World Cup at a later time.

"Right now I'm only focused on making a great job with the national team and Fiorentina and I hope I'll approach the World Cup at top condition.

"Of course I can play both forthcoming matches for 90 minutes, but the recovery time is decided by the doctors and physiotherapists.

"I'm back after a break of two years and I've played seven matches in about three weeks, therefore it's hard.

"Fiorentina had many injured players, therefore I had to play some more matches and I'm a bit tired. But I won't hang off on the day of the match. We'll see my conditions in these days and see what we can do."

Rossi has been impressed with the progress 2006 world champions Italy have made during his absence and believes they are well equipped to give a good account of themselves in South America.

"Compared to two years ago, the national team is much more mature and self-confident," he added.

"You can see the personality of the players in the matches they played. The national team is made of excellent players, they all have great skills. In my opinion, the group is very mature and this is very important."