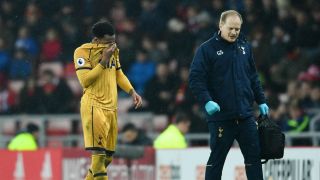 Erik Lamela and Danny Rose returned to first-team training at Tottenham on Wednesday as they increase their respective rehab workloads.

Rose suffered a knee injury in January and has endured a frustrating spell on the sidelines with multiple setbacks in that time, but he finally appears to be nearing a comeback.

It is the first time that Rose has appeared in full training since a controversial close-season in which he criticised Spurs' transfer policy and claimed to be underpaid – comments that resulted in a club fine.

Rose blasted Spurs in the interview for failing to sign players that "you don't have to Google" and made no secret of his willingness to move back to the north of England before he retires, with Manchester United reportedly ready to prise him away.

Danny Rose and train with the rest of the team at Hotspur Way today as they continue to progress with their rehabilitation. October 11, 2017

Lamela has been missing for even longer, having picked up a hip problem that has prevented him from playing since October 25 last year.

The Argentina international has also spent some time with the medical staff at former club Roma during his time out, with the two clubs working together in an attempt to help him fully recover.

Spurs have not set specific return dates for the players, but neither will be in action against Bournemouth on Saturday.