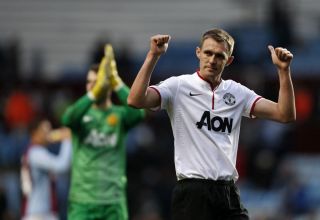 The Scotland international made his first Premier League appearance since Boxing Day 2012 when he came off the bench in United's 3-0 win at Aston Villa last December.

Fletcher started just nine top-flight games for United in the last two seasons because of his battle with ulcerative colitis, but has featured eight times in all competitions since his long-awaited comeback at Villa Park.

And the 30-year-old has outlined his desire to ensure he makes the most of the rest of his career after spending the best part of two years out of regular action.

"I feel like I'm making up for lost time, to be honest," Fletcher told Inside United, the club's official magazine.

"I always cherished the position I was in and people were saying: 'You should just be happy to be back.'

"But I never wanted to get in that mindset because I think it's a dangerous mindset to get into, where you just accept a level.

"I always feel that if you put caps on just being happy and settling for stuff, then you can never progress yourself.

"So I see that I've got a lot of lost time to make up for. I want to try and put those two years on at the end of my career."