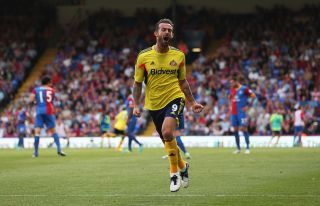 Fletcher, Sunderland's top scorer last season with 11 goals, dislocated his shoulder during the 3-0 defeat to West Brom in September.

Despite originally being tipped to miss between four and six weeks of action, Fletcher could feature against Swansea City on Saturday as Sunderland target their first Premier League win of the season.

"He will be available for us, which is great news," Poyet said on Thursday.

"When I signed the contract, he was a question mark, but now we know that he is back.

"It’s a massive boost because I didn't know whether he'd be fit."

Sunderland's trip to the Liberty Stadium will be Poyet's first game in charge of the club, having taken over from Paolo Di Canio on October 8.

After losing their last five league games, shipping 14 goals in the process, Poyet believes his side need to be positive and target the win.

"Swansea are a team that have been playing the same system for while and are very comfortable with it," he continued.

"At the moment, though, it doesn't matter too much who we play, or where, our position means that we need to go out looking for a win."