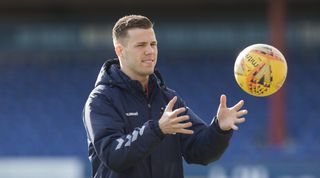 Hibernian have offloaded Florian Kamberi after the Swiss-born striker secured a return to his native country to sign for St Gallen.

Kamberi had been told he would play no role for Hibs after entering the final year of his contract.

The 25-year-old had angered the Hibs support and surprised head coach Jack Ross by describing his January loan move to Rangers as a “dream” switch.

Hibs accepted an undisclosed fee for the former Grasshoppers Zurich player, who was called up to the Albania squad in November last year.

The Easter Road club say they hold an “interest in any future switch”.

Kamberi scored 30 goals in two years with Hibs and netted once in nine appearances for Rangers, most of them coming off the bench.

He moves to St Gallen two days after the Swiss side sold forward Cedric Itten to Rangers.

A Hibs statement finished: “We wish Florian well for the future.”

Although Ross said last week it was unlikely the club would use any income from Kamberi’s prospective transfer to fund a new signing, Hibs have since been linked with moves for Rangers midfielders Greg Docherty and Ross McCrorie.