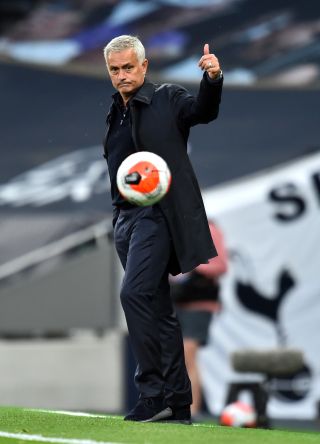 Jose Mourinho was up against his former club and almost came away with a win as Tottenham conceded a late penalty in a 1-1 draw against Manchester United.

Here, the PA news agency takes a closer look at the Portuguese’s evening.

Had this game been played on its original date of March 15, Mourinho’s team would have looked nothing like this. At the time Harry Kane, Son Heung-min, Moussa Sissoko, Davinson Sanchez and Steven Bergwijn were all injured and the remaining players were demoralised by a Champions League exit and six games without a win. Unsurprisingly all six returned to the starting line-up, with Sanchez chosen for his pace at the back. Dele Alli was banned, Lucas Moura picked up a knock and Giovani Lo Celso was only fit enough for the bench, so it is difficult to know if this was Mourinho’s first-choice team. But it was definitely a stronger XI than he was able to put out before coronavirus struck.

Spurs had struggled to get going in a pedestrian opening 20 minutes, but some words of wisdom from Mourinho at the drinks break had an immediate impact. The boss was seen giving Steven Bergwijn some clear instructions and five minutes later it paid dividends. The Dutchman produced a brilliant bit of explosive play as he burst through a statuesque United defence and powered home. Minutes later he almost turned provider as another run down the right saw him tee up Son Heung-min, who was only denied by a brilliant David De Gea save.

Despite having almost a full armoury of attacking players, Mourinho still set his side up in a pragmatic way to soak up United’s power and pace and look to hit their visitors on the break with pace of their own. It looked like working for 80 minutes as Bergwijn’s opener put them ahead and they contained United, even if they needed a fine save from Hugo Lloris to keep their lead in tact. But in the end, they could not quite see the job through as a moment of stupidity from Eric Dier saw United get a penalty, which Bruno Fernandes scored. It was so nearly a Mourinho masterclass.