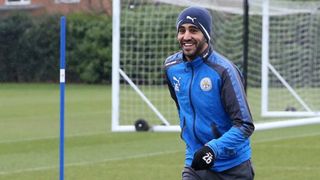 Riyad Mahrez was back in training with Leicester City on Friday after 10 days away from the club.

Pep Guardiola had tried to sign Mahrez to boost his attacking options in Leroy Sane's injury-enforced absence, but City could not do a late deal with the Foxes.

And with Leicester taking on the title favourites in the Premier League on Saturday, a club statement confirmed Mahrez has returned to the club.

"Riyad remains a greatly valued member of Claude Puel’s squad and is focused, together with his team-mates, on achieving further success with Leicester City," the statement said.

Puel indicated in Thursday's news conference Mahrez would not be available for selection for the trip to the Etihad.

"I hope he can get his head right and come back with us and work hard," the Frenchman said. "The best way is to come back and enjoy his football."