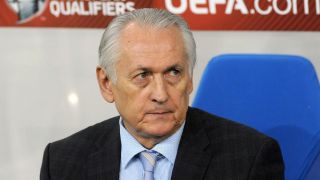 Goals from Andriy Yarmolenko and Yevhen Seleznyov secured the 2-0 victory over Slovenia in Lviv, moving Ukraine a step closer to the finals in France next year.

However, Fomenko urged caution from his players and insisted the tie is only at half-time, with the return leg to come on Tuesday.

"We have won the first half of our tie, and I am delighted with the clean sheet, but now we should prepare for the second," he said. "Tuesday's game will be the final decisive one.

"After the first goal we made some mistakes, individual mistakes – maybe my players started to relax.

"Now we need to calm down. Our players know what they have to do in the second leg."

Slovenia coach Srecko Katanec rued a lacklustre display in front of goal from his side, but retained some hope they can turn the tie around on Tuesday.

He said: "It was very disappointing that we missed all our chances, particularly one at the start of the game.

"However, we still have the second leg so this is not the end of our campaign. We still have to play at home and our fate remains in our hands.