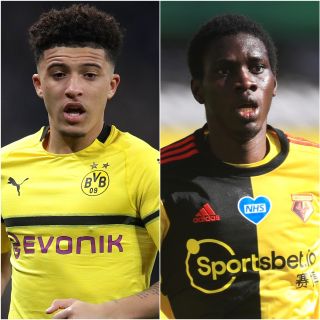 The coronavirus pandemic is reportedly to blame for Manchester United’s decision not to follow through on signing Jadon Sancho. The Guardian says Borussia Dortmund’s £108million asking price, combined with his wage demands and the fee wanted by his agent, would cost almost £227m – a figure club bosses were not prepared to pay amid the economic uncertainty of the pandemic.

Staying with United, the Manchester Evening News reports the club could make another move for Watford winger Ismaila Sarr after having a previous bid rejected. The Red Devils had enquired about an initial season-long loan for the 22-year-old, however the Hornets are understood to be holding out for a permanent transfer.

Chelsea left-back Baba Rahman is believed to be attracting plenty of interest ahead of the EFL transfer deadline on October 16. The Daily Mail says Watford and Middlesbrough are mulling potential loan moves for the Ghanaian.

Following reports West Ham had enquired about Watford defender Craig Dawson, The Sun says the club could make a move during the domestic transfer window but would need to pay a transfer fee of £4m to make it happen.

Leeds United fans, one to look out for or one to simply ignore? https://t.co/nkARSClxPr#LUFC#NCFC— Mirror Football (@MirrorFootball) October 7, 2020

Chelsea in transfer race against time as Malang Sarr heads to Porto on loan for season and Emerson still up-for-grabs https://t.co/DaZaP7PlUA— The Sun Football ⚽ (@TheSunFootball) October 6, 2020

Joe Rodon: Tottenham and West Ham are interested in the Swansea defender, according to Wales Online.

Eric Garcia: Barcelona will wait until next year to sign the 19-year-old from Manchester City, reports Marca.