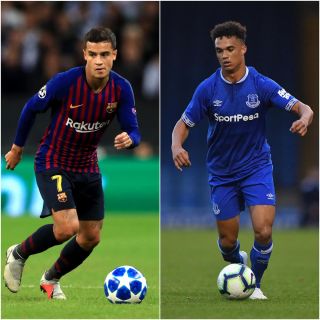 Former Liverpool midfielder Philippe Coutinho has been told he can leave Barcelona for a cut-price £77million in the summer, and the leading Premier League clubs are lining up for his signature. Liverpool are said to be keen to re-sign the 27-year-old – currently on loan at Bayern Munich – but now Chelsea, Manchester City, Manchester United, and Tottenham are also interested, the Daily Express reports.

Wigan left-back Antonee Robinson is a target for Chelsea, Aston Villa and Newcastle, according to the Daily Mirror. The 22-year-old United States international was set to move to AC Milan last month until the deal fell through on transfer day.

Abdoulaye Doucoure expects to be allowed to leave Watford without a problem to move to a Champions League club should an offer arise, the Daily Mirror reports. The French midfielder has been a target for Everton and Paris St Germain in previous transfer windows, and is likely to draw more attention in the summer. He says his preference is to stay in the Premier League and that if a big club came knocking, Watford would “let me go easily”.

Liverpool, Manchester City and Chelsea are set to battle for the signature of Villarreal winger Samuel Chukwueze, the Daily Mail reports. Liverpool were formulating a £30million bid for the Nigerian in January but ultimately, no offer was made. City have also shown their interest, and now Chelsea are also said to be keen to sign the 20-year-old, who is rated by Villarreal at £60million.

Erling Braut Haaland might have joined Borussia Dortmund last month after one of the most closely watched transfer sagas of recent years, but Manchester City are still keenly interested in signing him, according to 90min.com. The 19-year-old Norway striker is seen by City as a possible long-term replacement for their 31-year-old Argentina striker Sergio Aguero.

Jorginho: Chelsea’s Italy midfielder could be keen on reuniting with Maurizio Sarri at Juventus, according to the Daily Mail.