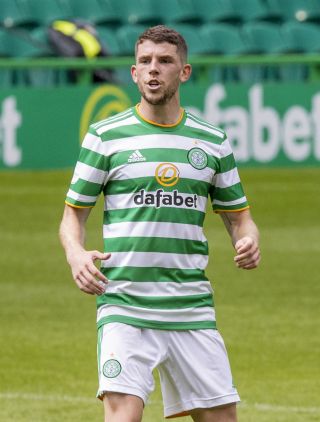 Health chief Jason Leitch insists Scotland stars Ryan Christie and Kieran Tierney have been treated no differently to the general public after both were ordered into quarantine.

Celtic playmaker Christie and Arsenal left-back Tierney have been told they must self-isolate for 14 days after their Scotland team-mate Stuart Armstrong tested positive for Covid-19 while on international duty.

Christie and Tierney both returned negative test results and have insisted they complied with social-distancing guidelines – yet they now face missing major games for club and country.

NEWS | We can confirm that there has been a positive test for COVID-19 in the Scotland squad.https://t.co/8abHTSnerv— Scotland National Team (@ScotlandNT) October 7, 2020

The pair will miss Scotland’s triple header, including Thursday night’s Euro 2020 play-off semi-final against Israel, along with huge club games on October 17.

Christie will sit out the opening Old Firm clash of the campaign when Rangers visit Celtic Park and Tierney is ruled out of the Gunners’ clash with Manchester City.

That sparked frustrated responses from their club employers, who have both asked for clarification on self-isolation measures from the Scottish authorities.

But Professor Leitch, the Scottish Government’s National Clinical Director, made clear that health bosses in Lothian have followed the rules to the letter.

He told Radio Clyde: “The local health protection team in the Lothians treats footballers the way it treats workers in call centres or you in your media job or me.

“And then they make a judgement about who they have been in close contact with.

“They understand the nature of hotel rooms versus houses versus cafes or diners or buses.

“The health protection team in Lothian have decided who the contacts are and those contacts have been asked to self-isolate.

“I cannot intervene or second guess what that process is. That’s exactly how the process should work and footballers are not treated any differently in that bit of the process than any other member of our society.”

Celtic are also sweating on the availability of Odsonne Edouard for the head-to-head with Steven Gerrard’s side after the striker tested positive while away on France Under-21 duty.

And the Hoops say they are keen to hold talks with Holyrood bosses after Christie was ordered to lock himself away for two weeks.

They said in a statement on Wednesday: “Following today’s news regarding Ryan Christie, he has reiterated his adherence to all relevant protocols while on international duty.

“In light of this, Celtic confirmed that it aims to open dialogue with the Scottish Government and other authorities to fully understand the self-isolation procedures for those players who continue to deliver negative test results, as Ryan has.”

An Arsenal statement said: “Our medical team have confirmed that Kieran was socially distant at all times from the player who tested positive and has broken no rules regarding Covid-19 protocols.

“We are currently seeking further advice and clarification of the details.”

Meanwhile, a friendly between Scotland and England’s Under-19s was abandoned at half-time after Scots head coach Billy Stark was told he had tested positive during the match.

Negative tests were returned by players and staff from both teams ahead of the game at the Football Association’s St George’s Park training complex near Burton.

But with the sides scheduled to meet again on Sunday, a second round of testing was required and returned a positive case for Stark, prompting the fixture to be halted with England 3-1 ahead.

A statement from the Scottish Football Association read: “Despite testing negative during Sunday’s test, Billy Stark returned a positive test for COVID-19 this afternoon.

“The result of the second test was immediately relayed to the Under-19 team manager and the game was abandoned immediately, in line with established Covid-19 protocol.”

Stark will travel home in isolation and self-isolate for 10 days, while Scotland’s players and the rest of the backroom team will undertake precautionary self-isolation for 14 days.

Sunday’s match between the sides has been postponed, in addition to an Under-17 fixture scheduled to be held at St George’s Park on Saturday.