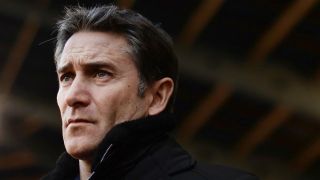 Former Rennes and Real Sociedad coach Philippe Montanier has been confirmed as the new head coach of Nottingham Forest.

The Frenchman takes the position vacated by Dougie Freedman, who was sacked in March following a poor run of results that preceded a disappointing 16th-place finish in the Championship under the caretaker management of Paul Williams.

Montanier, who played as a goalkeeper for Toulouse, Nantes and Saint-Etienne during his playing career, has signed a two-year deal at the City Ground and the club will hope he can emulate the success he had as a manager in Spain and France.

After making more than 300 appearances during his time as a player, Montanier took charge of Boulogne and steered the club to Ligue 1 for the first time in its history.

He then managed Valenciennes for two seasons before taking over from Martin Lasarte at Real Sociedad, where he achieved a fourth-place finish in La Liga and guided the club into the Champions League for the first time in a decade.

As head coach of Rennes from July 2013 to January 2016, Montanier reached the final of the Coupe de France in 2014, and he will take charge of his first competitive Forest game when the Reds take on Burton Albion on August 6.