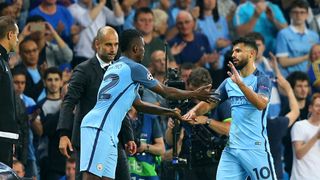 Manchester City manager Pep Guardiola refused to be drawn on speculation over the futures of strikers Sergio Aguero and Kelechi Iheanacho as his side look to rubber-stamp Champions League qualification at Watford.

A report by the Telegraph suggested Aguero will seek assurances over his future following a campaign where he has scored 31 goals but seen his status as City's number one striker come under threat from Gabriel Jesus.

Aguero's dazzling display in Tuesday's 3-1 win over West Brom, where he did not find the net himself but was heavily involved in each goal, drew warm acclaim from Guardiola, who has often tempered his praise of the Argentina star.

Iheanacho made an impressive first-team breakthrough last season under Manuel Pellegrini but the 20-year-old has found opportunities hard to come by since Jesus' arrival from Palmeiras in January.

West Ham have been linked with a £20million bid for the Nigeria international but Guardiola only has eyes for Sunday's trip to Vicarage Road, where victory will assure City of third place.

"I know the question is going to come but forget about it.

"The day after tomorrow we have a real final and the players have to be focused on that."

Only defeat, victory for Liverpool and Arsenal and a five-goal swing in favour of Arsene Wenger's men can deny City a spot in the top four but Guardiola is taking nothing for granted on the back of three consecutive home wins.

"It's a crucial game, a final for us. It's in our hands. Just look what we have to do, we have to travel to London to win the game," he said.

"Every game there is pressure, every game we play for everything. It does not depend on Arsenal or Liverpool, it depends on us.

"We have had a good period. We have won three games in a row but we still have 95, 96 minutes to fight.

"Watford have had a good season. They are safe. We have to be careful."

"We didn't fight until the end because two teams [Chelsea and Tottenham] were better. We dropped a lot of points at home," he added.

"We have to improve next season. We have to work harder to reduce the gap. Against West Brom we created a lot of chances. That is the way we have to play. We are going to make changes [in the off-season]."