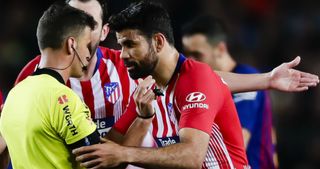 Diego Costa is currently serving an eight-game ban for a foul-mouthed rant at a referee in Atleti's defeat against Barcelona last week.

And after receiving news that he is also to be punished by the club, the former Chelsea striker failed to attend Thursday's training session.

Diego Simeone has today said the issue is resolved after internal discussions, and according to AS in Spain, the Argentine wants Costa in his team next season.

"It doesn't change what I think of Diego," said Simeone. "I don't think he had a good season, spoiled by injuries.

"I have no doubt that the season coming, all of the rebelliousness and qualities as a player, and the things he has lived through this season, will make him a better player."

SERIES: Why I love… Diego Costa