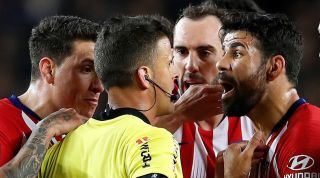 Diego Costa is a baddie; a footballer so perfectly conceived to infuriate fans of whatever team he’s playing against that you genuinely wouldn’t be surprised if he was cooked up in a lab.

His sheer presence in any team somehow turns them into the Monstars from Space Jam – evil glint in his eye, elbows sharpened, muscles held together with barbed wire.

The latest news that he’s been banned for eight games, then – so the rest of this season, plus one at the start of next – for allegedly insulting referee Jesus Gil Manzano’s mother in Atletico Madrid’s 2-0 defeat at Barcelona should come as no surprise.

For eight games, though, you would have to imagine that this is no garden-variety sledging. I mean, he must have really done his research. A few calls in the lead-up to the match. Found the right nerve to hit. Gianfranco Zola used to spend hours after training practicing his free-kicks. Costa spends them working as a P.I, isolating exactly which button he must push to incense you the most. Usually fine, less so when it’s a referee.

You often hear about players who need to play on the edge, as it were. Steven Gerrard spoke about it this season with reference to Rangers’ Colombian top scorer Alfredo Morelos, who also happens to have been sent off five times this year.

For Costa, it’s always been in him. Onésimo Sánchez, his coach at Valladolid – the club he joined aged 20 – said “a more laid-back Diego would only be 20% of what he is. In fact, as a coach, you need to calm him down rather than risk firing him up any further.” This quote, by the way, was taken from Fran Guillén's biography on Costa which is happily titled The Art Of War.

A little reminder, then, of Diego’s more colourful transgressions. There was his, er, tussle with Laurent Koscielny and Gabriel Paulista. A couple of lashes out at Marcos Rojo here. A bite on Gareth Barry there – lovely, harmless, innocuous centre-mid Gareth Barry – before cradling his neck (surely the most mobster thing anyone’s ever done on a football pitch). The time he took umbrage to a reducer from Jamie Vardy.

Say what you will for Costa: if he took an actual hit, he rarely stayed on the ground for long.

He is now 30 years old and his body looks like an creaking old oil-rig that’s been left to rust in a Louisiana field. His best days are behind him, the death-knell of retirement probably only a few seasons away.

It’s a shame, really. As the game becomes more technical, more fastidious, more polished and preened, the set of skills that Costa has will likely be schooled out of players early doors.

But the game – in fact, every sport – needs these villains... these top-grade shithouses. They are the physical manifestation of every horrible thought we’ve ever had; a pressure valve that needs to be released, for the good of everyone.

And even though Costa won’t play for the rest of the season, that’s just playing into his hands. He’ll still be there. Watching. Waiting. Simmering on the back hob, ready for his return.

I hope he never plays against my team again.