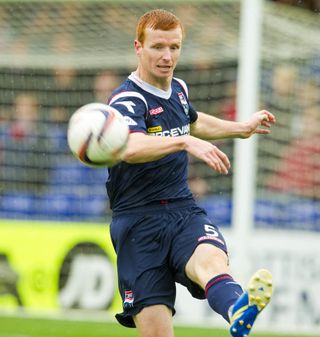 Kilmarnock defender Scott Boyd has returned to Ross County to become the Staggies’ new sporting director after deciding to retire from playing duties.

The centre-back, 33, made over 300 appearances for the Dingwall outfit during a nine-year spell in the Highlands.

The former Livingston and Partick Thistle defender spent the final two years of his career at Rugby Park, where he mixed playing for Steve Clarke’s side with studying for a sports management degree run by global players’ union FIFPro.

Now County chairman Roy MacGregor has tasked him with developing the club’s commercial and business links.

“We are delighted to bring Scott back to the club in the newly created sporting director role,” said MacGregor. “Many will know that Scott started studying towards a sports management degree with FIFPro during his time with the club.

“Since graduating, Scott has combined his playing career with spending two days a week at Rugby Park gaining a valuable insight into the running of the club.

“Scott’s role will have a heavy focus on business and community engagement. He will be tasked with developing and building the RCFC brand, particularly across the Highlands & Islands, and work with our community, youth, academy and first teams, enhancing the commercial opportunities for each entity.

“Scott will also be responsible for bridging the gap between the football and commercial functions of the club, focusing on building relationships with sponsors, businesses and supporters alike.”

In a statement, Kilmarnock thanked Boyd for his service, saying: “The club can confirm that defender Scott Boyd will leave Killie to become sporting director at Ross County.

“In addition to his hard work and dedication on the field, Scott completed an internship in the Rugby Park administration office as part of his sports management degree.

“With his mixture of warmth and humility, Scott was extremely popular with staff, management and players alike.

“Everyone at the club would like to thank Scott for his contribution to the club and we wish him good look on his return to Dingwall.”