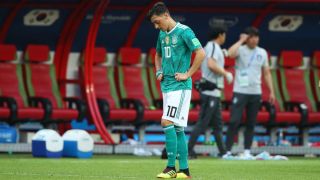 Mesut Ozil's decision to retire from international football as a result of feeling persecuted by the German Football Federation (DFB) has left their former president Theo Zwanziger "deeply saddened".

Arsenal midfielder Ozil released a three-part statement on Sunday, addressing the criticism he has come under in recent months following his meeting with Turkey's controversial president Recep Tayyip Erdogan.

While the German media, sponsors and even some fans were targeted by Ozil – who has Turkish roots – in his letter, current DFB president Reinhard Grindel bore the brunt of the midfielder's fury.

Grindel was accused of incompetence, belittling Ozil's Turkish heritage and scapegoating the playmaker for Germany's World Cup group stage exit, while the 29-year-old alleged the DFB's treatment of him was comparable to "racism".

Although Zwanziger, who was outright president from 2007 to 2012 having previously served as a co-president, defended Grindel, he expressed sympathy for Ozil and understands the measures he has taken.

"I am deeply saddened by the decision made by Mesut Ozil," Zwanziger told Deutschen Presse-Agentur. "[It's] a major setback for the integration efforts in our country beyond the football.

"Due to errors in communication, something has happened that must never happen to migrants: they must never feel like second-class German citizens. If this impression arises, you have to take counter-measures.

"I know Reinhard Grindel and Oliver Bierhoff well enough to say that I cannot imagine that they would consciously bring about such a situation."