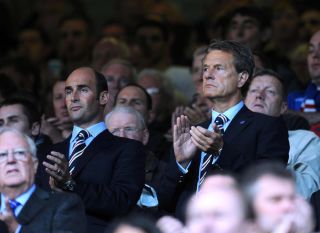 Former Ibrox chairman Alastair Johnston has taken a swipe at Celtic fans who claim Rangers are a new club.

Many Hoops supporters, and indeed some fans of other teams in Scotland, maintain that the Govan outfit ceased to exist when it went into administration in February 2012 before going through liquidation, and that it was another incarnation of the Light Blues which emerged in the bottom tier of Scottish football.

Johnston’s chairmanship ended when Craig Whyte took over in 2011 before the club’s financial implosion but he returned to Ibrox as a director in 2017.

He believes the 2-1 win over Celtic on Sunday, the first Gers victory at Parkhead since 2010, demonstrated the self belief at Ibrox going into the new decade.

Reflecting on the dark days of 2012 and the fall-out, Johnston told the PA news agency that Rangers not only survived but are now thriving.

“I left after we won the title for the third time in a row in 2011 and I wasn’t believing my ears about what was going on at the club and where it was going,” he said.

“You were hearing all the words like the Rangers have disappeared, they have died, it was a new club and all the stuff which self-interested people tried to maintain.

“I always wondered about the mentality of certain Celtic supporters, not by any means most of them, who basically said our club died in February, 2012.

“The way you determine it by the number of times (54) we won the top division.

“So you were dealing with that sort of mentality, with Rangers fans being defensive.

“But the reality is Rangers survived and not only did they survive, they started to thrive again.

“We have left survival behind us and it is now all about thriving and seeing how far we can go.”