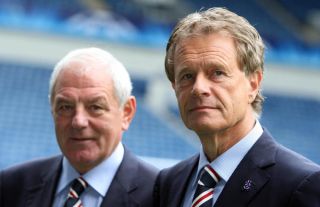 Rangers’ first win at Celtic Park in almost a decade confirmed the “sense of belief” that has returned to Ibrox, according to former chairman Alastair Johnston.

Sunday’s 2-1 victory, their first at Parkhead in the league since October 2010, took Steven Gerrard’s side to within two points of their Old Firm rivals at the top of the Ladbrokes Premiership table with a game in hand.

Johnston was chairman at Ibrox from 2009 to 2011  before he left following Craig Whyte’s takeover and before the club’s financial meltdown in 2012 saw them re-emerge in the bottom tier of Scottish football.

While it took Rangers four years to return to the top flight, Celtic became all-conquering and have now won the last eight league titles and the last 10 trophies on offer in Scotland.

Johnston, who returned to the Rangers board as director in June 2017, told the PA news agency of the significance of beating Celtic before the winter break.

He said: “Sunday was important for the fans. It is always important to keep their enthusiasm going and that was terrific.

“Psychologically, not just the victory on Sunday but the performance three weeks ago (Betfred Cup final defeat by Celtic), if you put those things together there is a sense of self-belief in the entire club, that we are back.

“It may not be level terms because certainly the values of the players and the amounts being paid at Parkhead are not close to what we are paying.

“But I do think there is the sense that we are in reach and the mistakes that we made last year after the winter break – let’s hope that we have learned from that experience.”

Johnston was referring to the fact that Gerrard’s side had beaten the Hoops in the last game of 2018 to go level on points with the Parkhead side at the top, only to fall away after their return from the winter break.

The 71-year-old businessman, who splits his time between Scotland and the USA, believes the Govan club are now better prepared to put an end to Celtic’s domestic domination.

“Last year was certainly disappointing because we did feel that we were in reach at the turn of the year, after the victory at Ibrox, but then there was a reality check,” he said.

“Steven and the new team had to have time to bed in. I said Steven was going to be a better manager in the second year of his tenure.

“This year was the one, certainly from the board’s standpoint, that we have invested for. There is no question about that.

“We are encouraged by the first half of the season but certainly not satisfied.

“Satisfaction does not come into this thing until April or May, to see how we have done in the competitions.

“But I tell you what, we are better positioned than we have been for a long time.

“We are playing against a club (Celtic) who have a very good team and a very good management system.

“That was the difference a couple of years ago when we got pushed around by them in ways which were very uncomfortable to all of us.

“They had better players right across the board than we had but I think that landscape has changed.

“We are getting closer to having parity on the field.

“We would never underestimate Celtic, they have a lot of experience, a lot of very good players.

“But having said that, the last couple of months have given us aspiration that in the second half of the season, we can produce the results that will end up winning something and not just having a quality season.”