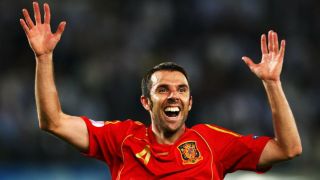 Marchena, 36, made his international debut in 2002 against Hungary and was a member of the victorious Spain squads at Euro 2008 and the World Cup two years later.

A product of the same age group which produced the likes of Xavi Hernandez and Iker Casillas, he was capped 69 times and last appeared for Spain in a friendly against Venezuela in 2011.

It was at the Mestalla where he enjoyed the most success, winning two La Liga titles, the UEFA Cup and a European Super Cup during his time with Los Che.

A statement on the Spain national team website said: "Marchena is regarded as one of Spain's best defenders of all time and one of those players that has been surrounded by success all his career."

In an open letter discussing his decision to hang up his boots, Marchena wrote: "I am putting an end to my active career as a footballer. It has not been easy, but that's life and now it's time to face a new era.

"I want to thank everyone who has helped, taught and supported me throughout these years.

"I feel privileged to have had the chance of experiencing many, many different things.

"This beautiful journey … has not stopped enriching my life, both personally and professionally.

"I carry [with me] football, my education, good friends and an overall magnificent experience."