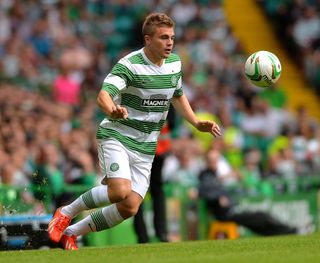 The 22-year-old did not play for the Scottish Premiership champions throughout September due to a back injury and a virus.

He returned with substitute appearances against Barcelona in the UEFA Champions League and Motherwell domestically, but did not travel with Scotland for their final FIFA World Cup qualifiers in an attempt to conserve fitness.

And Forrest is now determined to break into Neil Lennon's plans as they aim to extend their Premiership lead and get on the board in Europe after two defeats from their opening Group H games.

He told the club's official website: "It's just been bad luck getting not well and having a wee niggle here and there and I just need a wee bit of luck now to get a run of games.

"We have a lot of big games left and once all the boys are back on Thursday and Friday we can look forward to the next few weeks.

"When you haven't been well, you don't want to come back and do too much, so it's been a good wee break and I have been able to do some hard work.

"I feel better in training and I just need to try and get back up to speed fitness-wise."