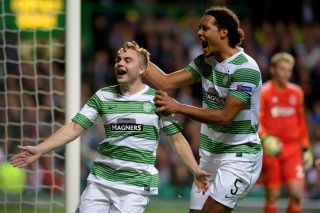 The 22-year-old has reportedly attracted the attention of Cardiff boss Malky Mackay, but Lennon insists he is in no rush to cash in on the Scotland international.

The Northern Irishman admits he is not shocked Forrest has caught the eye of other clubs after losing Victor Wanyama and Gary Hooper to Southampton and Norwich City respectively in the close season.

"It wouldn't be a surprise if other clubs were looking at James because he is a brilliant player," he told the Daily Record.

"But he signed a long-term contract 18 months ago. We are months and months away from the window - he is not for sale.

"I don't know if people are trying to unsettle players here. It’s as if everyone wants me to sell a player every month - people talked about Virgil van Dijk, Scott Brown, Fraser Forster and now James. These players are not going anywhere.

"We are in a very stable position as a club and that is something which is a rarity in this day and age.

"The players are happy, vibrant and we have a lot to look forward to. We are on a great run domestically and we're in a hell of a group in the Champions League where we have competed brilliantly in all three games."

Celtic are currently six points clear at the top of the Scottish Premiership with a game in hand over closest rivals Aberdeen.