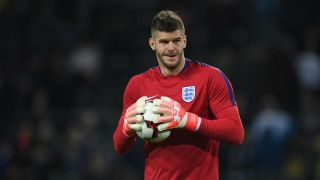 Fraser Forster has got his sights set on becoming England's number one goalkeeper, overhauling his country's current incumbent Joe Hart.

The Southampton shot-stopper is one of four goalkeepers in Gareth Southgate's squad that will face Scotland in a World Cup qualifier on Saturday before meeting France in a friendly three days later.

And while Hart is expected to remain Southgate's first choice, Forster believes his time will come in the future, with Stoke City's Jack Butland and Burnley captain Tom Heaton also jostling for places in the World Cup squad.

"There's obviously quite a lot of English keepers around at the minute, but I think if you look at Joe Hart he's the number one at the minute," Forster told Sky Sports.

"He holds the shirt off the back of what he's done this season and what he's done previously for England. I want to one day be England's number one but that will take a lot of hard work.

"I need to go out and play as well as I can for Southampton and try to force my way onto that plane [for Russia]. If I play well then it puts the pressure on Joe to be performing week in week out, then ultimately the manager has to make a decision.

"It's a huge season for everyone and for me as well so I think, for me, I just want to come back and hit the ground running and have a great season. I want to work as hard as I can and keep improving."

0 - Fraser Forster is yet to concede a goal in six Premier League games this season for Southampton. Rock. February 26, 2016

England head to Hampden Park four points clear at the top of Group F, and although they beat Scotland 3-0 at Wembley in November Forster is expecting a tough challenge.

"It's obviously a crucial game that we want to win and we're under no illusions how tough that game will be," added Forster, who kept six successive clean sheets after returning from injury for Southampton in 2016-17.

"It's important we go to Scotland and get those three points."