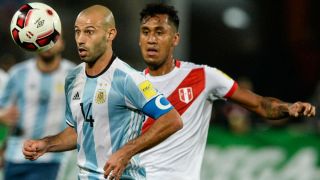 Javier Mascherano took full responsibility for Argentina's late slip-up in their 2-2 draw in Peru, branding his costly error as "s***" in a foul-mouthed post-match rant.

The away side had been leading 2-1 thanks to goals from Ramiro Funes Mori and Gonzalo Higuain either side of Paolo Guerrero's effort for Peru, but Mascherano gifted the hosts an equaliser six minutes from time.

The Barcelona defender's limp back pass was intercepted by Guerrero, who was then brought down in the area by Funes Mori and Christian Cueva converted the resulting penalty, leaving Mascherano livid with himself.

"Regrettably, because of my mistake, we don't take all three points," he told broadcaster TyC.

The result leaves Argentina in fifth place with 16 points in the CONMEBOL World Cup qualification standings, three behind leaders Uruguay.