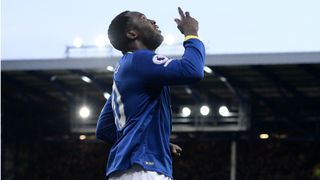 Romelu Lukaku inspired Everton to a thrilling 6-3 victory over Bournemouth at Goodison Park, marking a Premier League milestone in the process.

Belgium forward Lukaku - one of the best strikers in the world according to his manager Ronald Koeman - had already matched the quickest top-flight goal netted this season when he fired Everton ahead just 30 seconds into Saturday's contest.

Lukaku turned provider for Everton's second goal 23 minutes in, setting up James McCarthy before, soon after, the former Chelsea man doubled his tally following a calamitous error from Simon Francis.

Despite Lukaku's proficiency in front of goal, it appeared Everton - who were involved in a remarkable 3-3 draw against Bournemouth at the Vitality Stadium last term - would throw away the points when Josh King's brace set up a frantic final 20 minutes.

Romelu Lukaku has just scored the Premier League's 300th hat-trick. Take a look back at some of the most memorable... February 4, 2017

However, Lukaku came to their rescue, capping off a well-worked team move with a superbly-taken volley, marking his second hat-trick of the season and the 300th three-goal haul in Premier League history.

The 23-year-old added his 16th league goal of 2016-17 moments later, moving to the top of the Premier League scoring charts in style after racing onto Ross Barkley's throughball.

And though there was still more goals to come - from Harry Arter and Barkley respectively - but Lukaku's extraordinary score had ensured the points already belonged to the hosts.