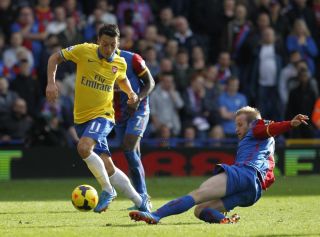 Arsene Wenger's side slipped to second in the table after they drew 2-2 at Southampton on Tuesday, enabling Manchester City to move a point clear by hammering Tottenham 5-1 the following day.

That result at St Mary's Stadium ended Arsenal's five-game winning run in the top flight, but three points against Tony Pulis' men would mean them taking advantage of the fact City do not play until Monday by reclaiming top spot.

Indeed, Arsenal are in something of a no-lose situation as long as they beat Palace, as City host third-placed Chelsea at the Etihad Stadium, meaning at least one of their main title rivals will drop points this weekend.

Wenger's team go into the clash in fine form having lost just one of their last 12 Premier League matches, but face a Palace side buoyed by consecutive top-flight wins.

Jason Puncheon scored the winning goal in both of those fixtures and Pulis signed the 27-year-old winger permanently on Friday after an impressive spell on loan from Southampton.

Goalkeeper Wayne Hennessey also joined Palace from Wolves on deadline day and could go straight into the squad at the Emirates Stadium, while Pulis is also said to be close to securing a deal for Blackpool winger Tom Ince.

Mathieu Flamini will also be unavailable after being sent off at Southampton, although Tomas Rosicky is back in contention following a broken nose. Theo Walcott (knee) remains a long-term absentee.

Kagisho Dikgacoi (calf) and Jerome Thomas (groin) could return for Palace, but Jonathan Parr is doubtful with a neck problem.

Arsenal won the reverse fixture at Selhurst Park 2-0 in October, thanks to Mikel Arteta's penalty and a late strike from Olivier Giroud.

However, Wenger is anticipating a tough test on Sunday after watching Palace lose 2-0 at Tottenham earlier in the month - a game in which Puncheon missed a penalty with the scores still level.

"I saw them play (at White Hart Lane) - they were absolutely impressive in that game. That is a good warning for us," said the Frenchman.