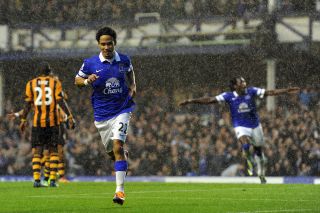 The Goodison Park club have made an impressive start to life under new boss Roberto Martinez, who took over from Manchester United-bound David Moyes in the close-season, suffering just one defeat in their opening eight top-flight fixtures.

Martinez's men bounced back from the disappointment of that 3-1 loss against Manchester City in ideal fashion last time out, picking up a 2-1 victory over Hull City to leave them seventh - just four points adrift of top club Arsenal.

And with eight teams not playing until Sunday, Everton have the chance to put themselves among the front-runners against a Villa side whose home form has been difficult to predict this season.

A 3-2 victory over Manchester City has been their undoubted highlight of the campaign so far, but a 2-1 defeat to Newcastle United at Villa Park on September 15 will give Everton the belief that they are more than capable of picking up three points.

In fact, that win over Manuel Pellegrini's men is Villa's only home triumph of the season so far - with their other successes coming away at Arsenal and Norwich City - but Paul Lambert's side are currently sitting on twice as many points (10) as they were at this stage last season.

As the most played fixture in English league football, there is no shortage of history to draw on in trying to pick a winner for this clash, with Villa just edging the stats 72 wins to 71 from their 196 league meetings.

And Martinez expects another tough encounter this time around.

"We won't underestimate their quality, that's for sure," the Spaniard said. "Anyone that can beat Arsenal or Manchester City deserves huge credit.

"When they have everyone fit and available, they are as good as anyone on their day."

Martinez will not be happy to learn that Christian Benteke is one Villa player fit and ready for action. The Belgian striker, who has five Premier League goals to his name this term, has not started since picking up a groin injury at Norwich in September, but made his comeback as a substitute in last Sunday's 2-0 defeat to Tottenham.

Ciaran Clark is likely to return from a bug that kept him out last weekend, while Gary Gardner and Marc Albrighton are doubts with back and throat problems respectively. Charles N'Zogbia (Achilles) and Jores Okore (knee) are long-term absentees.

For the visitors, John Heitinga could be missing after sitting out the win against Hull with a muscle problem, while Darron Gibson (knee) and Antolin Alcaraz (hamstring) remain sidelined.