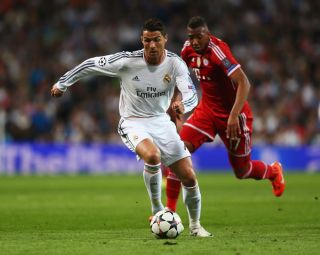 The Spanish side are the most successful team in the history of the competition, winning it nine times, but their quest for a 10th has been a story of near-misses.

Real have fallen at the semi-final stage in each of the last three seasons, twice coming unstuck against German opposition.

Borussia Dortmund beat Real 4-3 on aggregate last year in the semi-finals, while Bayern eliminated them on penalties in the last four of the 2011-12 campaign.

Real approach Tuesday's semi-final second leg at the Allianz Arena with a 1-0 lead though, following a strong performance in the opener in the Spanish capital.

Karim Benzema scored the only goal of the game, giving Carlo Ancelotti's side a precious advantage, but despite that, they will be wary of a Bayern side that has been imperious for much of the campaign under former Barcelona boss Pep Guardiola.

The Bundesliga champions are on course for five trophies in Guardiola's maiden season after winning the UEFA Super Cup and FIFA Club World Cup, while they battle Borussia Dortmund in the final of the DFB-Pokal.

Bayern have suffered just four home defeats since the start of last season, with Manchester City and Arsenal the only Champions League teams to taste success at the Allianz Arena in that period.

Yet Real coach Ancelotti insists they will go into the game with confidence as they aim to secure a treble in the Italian's first season in charge.

"I have every confidence in the players and I think everyone should do," Ancelotti said in quotes reported by the Spanish press.

"The plan in Munich is to score, rather than defend."

Ancelotti revealed on Saturday that Real's attacking trio of Benzema, Cristiano Ronaldo and Gareth Bale, the latter who missed Saturday's 4-0 win over Osasuna through illness, will all feature in Munich.

Alvaro Arbeloa, Jese Rodriguez and Sami Khedira (all knee) are Real's only absentees.

Defender Rafinha is available for Bayern after serving a domestic suspension at the weekend but, while Thiago Alcantara has returned to training, Holger Badstuber (knee), Xherdan Shaqiri (thigh) and Tom Starke (elbow) remain sidelined.

Bayern have been touted as favourites to retain the trophy throughout the tournament, and Guardiola is adamant the five-time champions can overturn the first-leg deficit.

"I have total faith in my team," Guardiola told the club's official website. "We can do it if we all pull together."