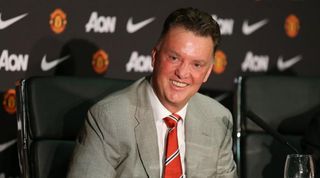 Having endured the disastrous tenure of David Moyes, United fans approached the 2014-15 campaign high on optimism after watching Van Gaal guide Netherlands to a third-place finish at the World Cup in Brazil.

However, a change of management has seen little immediate improvement, with just one point taken from league outings against Swansea City and Sunderland, while Tuesday's 4-0 League Cup humiliation at third-tier MK Dons was a new low.

United are at least boosted by the arrival of Argentina winger Angel di Maria from Real Madrid for a British transfer record of £59.7million, but Van Gaal is aware that there is no quick fix to the problems at Old Trafford.

"We have to look at the future and we are doing that now by restoring and rebuilding a new team and that costs time," he said on Thursday.

"I'm sorry to say that for the fans because the fans are amazing in my opinion. I think it's fantastic that we have such fans. I hope we fulfil their expectations but I said already that it is not done in one month.

"We have to win, to get results, and hopefully we shall start it on Saturday at Burnley."

Burnley, meanwhile, entered the new season widely tipped to go straight back down after gaining promotion from the Championship last term, and they have struggled in their new surroundings early on.

Sean Dyche's side were outclassed 3-1 by Chelsea in their opening fixture before an improved display could not prevent a 1-0 defeat at Swansea last weekend.

Saturday's game will evoke memories among home fans of Robbie Blake's thumping volleyed winner in the corresponding fixture five years ago as Burnley stunned the then-champions 1-0 in the first Premier League clash at Turf Moor.

Despite United's troubles, Dyche is fully aware of the threat posed by the 13-time Premier League winners.

"I don't think you start looking at them for any other reason other than they're a fantastic club, a very good group of players and a renowned manager.

"We're not naive enough to think that there's any other reason, they'll come here to play hard and try to get a result, and of course we'll do that as well."

Di Maria could make his United debut, although fellow new signing Marcos Rojo is still awaiting a valid work permit and is unlikely to feature.

Already without Luke Shaw and Michael Carrick, Van Gaal revealed that Ander Herrera - another new arrival - has picked up an injury, while Chris Smalling (groin) remains a doubt, as do Marouane Fellaini (ankle) and Jesse Lingard (knee).