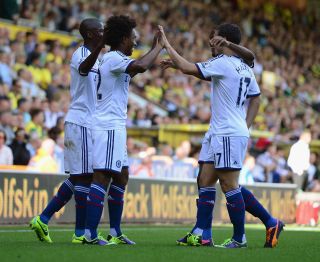 Jose Mourinho's side have not tasted defeat at home in the Premier League since a surprise 1-0 loss against QPR in January.

The London outfit have since won 10 and drawn two on their own turf and their run without a loss equals Everton's as the best in the division at present.

Chelsea head into the game against Malky Mackay's men in good form, having won four and drawn one of their previous five in all competitions.

Their latest success came in a 3-1 triumph against Norwich City at Carrow Road.

Anthony Pilkington cancelled out Oscar's opener, but late strikes from Eden Hazard and Willian ensured all three points for Chelsea.

Goalkeeper Petr Cech will rack up 300 Premier League appearances if selected, with only John Terry and Frank Lampard having achieved that feat for the club.

Chelsea are sweating on the fitness of defender Ashley Cole, who withdrew from England duty with a rib injury, while striker Fernando Torres has yet to return to training since sustaining a knee injury against Steaua Bucharest.

For Mackay, a return to league action following the international break will provide a welcome distraction from the off-field issues at the club that have cast a shadow over his position.

The Scot's future was unclear after the sacking of recruitment director Iain Moody, though Mackay did meet with the club's board during the week to ensure he would still have the final say on transfers.

One of the biggest concerns facing the 41-year-old will be the team's inability keep a clean sheet. Everton remain the only side that have been unable to breach the Cardiff defence in the Premier League this season.

They will look to bounce back from their 2-1 home defeat to Newcastle United in their last league outing.

A first-half brace from Loic Remy secured the points, despite a second-half strike from Peter Odemwingie.

Cardiff have no fresh injury worries to contend with and transfer-window signing Andreas Cornelius (ankle) is their only absentee.

The fixture marks the first league encounter between the two sides since March 1984.