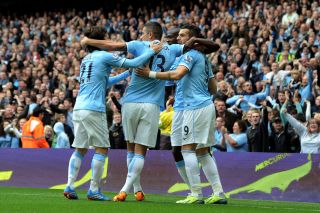 The 5-0 hammering of Blackburn Rovers in Wednesday's FA Cup third-round replay took the 2011-12 Premier League champions to 99 goals in all competitions.

Cardiff face a huge task to stem the flow of goals at the Etihad, where the hosts have netted 38 times in 10 league matches, all of which have ended in victory for Pellegrini's charges.

And the visitors' return of six points from 10 away matches will bring them little cause for optimism on Saturday.

However, the Welsh outfit do not have to think back too far to find inspiration ahead of what promises to be arguably their toughest top-flight challenge since earning promotion last season, having beaten this weekend's opponents 3-2 on home soil in August.

That was Cardiff's first Premier League victory, but only three have followed since, with manager Malky Mackay paying the price and Ole Gunnar Solskjaer now in his place.

While the Norwegian's tenure begun with a promising 2-1 FA Cup triumph over Newcastle United, his first league match saw a 2-0 loss to an out-of-form West Ham team last Saturday who climbed above Cardiff and left Solskjaer's side in the bottom three.

Manchester City are competing at the opposite end of the table and still harbour hopes of completing an unprecedented quadruple, with Premier League, UEFA Champions League, FA Cup and League Cup honours up for grabs.

The title race is likely to be Pellegrini's top priority and the Chilean has guided his side to six consecutive league triumphs as part of a 10-match unbeaten run in the Premier League.

Pellegrini was further boosted by the return of striker Sergio Aguero against Blackburn, with the Argentine scoring within 50 seconds of his introduction from the bench after recovering from a calf injury.

Squad depth is one of Manchester City's key strengths but they are not without their injury problems.

Midfielder Samir Nasri, an ever-present in the league, suffered a knee injury in the 2-0 victory over Newcastle last Sunday will be out for six to eight weeks, while Jack Rodwell and Stevan Jovetic (both hamstring) are also ruled out.

Yaya Toure was rested in midweek as he continues to nurse a back problem, but is set to return to the squad, while David Silva will also be in contention after being left out against Blackburn having picked up an unspecified knock.

Solskjaer has very few injury or suspension concerns, but Cardiff's form will have been occupying his thoughts.

A run of one win from 11 Premier League fixtures has dragged Cardiff into a relegation dogfight and they have failed to score in three of their last four league outings.

Jordon Mutch, the club's joint top scorer on four league goals, has missed the last two games with a hamstring problem, but could come back into the reckoning.