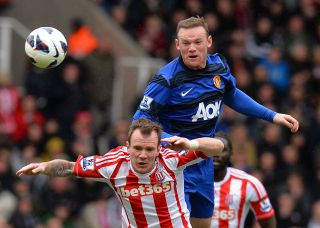 Reigning champions United - who sit eighth in the table - have taken just five points from a possible 12 at Old Trafford this season, and conceded late to draw their last home encounter 1-1 with Southampton on Saturday.

That result means David Moyes' men could go three games without a home victory in the Premier League for the first time since October 2005 should Stoke deny them three points this weekend.

Their only top-flight success at Old Trafford this term came in a 2-0 triumph over Crystal Palace in September, and Moyes will be desperate for his side to buck that trend against Mark Hughes' team.

United will be buoyed by their 1-0 victory over Real Sociedad in the UEFA Champions League on Wednesday, while history very much favours the hosts in this fixture, as they have won all five of their previous Premier League encounters with Stoke at Old Trafford.

Ahead of the game, midfielder Michael Carrick admitted United must do more to improve their position in the division, as they sit some eight points behind leaders Arsenal.

"The frustrating thing is we have had moments in certain games when you think 'this is it, we're on the up'," he told the club's official website.

"You can look at the Southampton game last Saturday and say we really should have won.

"In the past we have been good at getting on top of those things and seeing games out. I am sure we will do that in the games we have coming up."

United expect to welcome back Robin van Persie from a toe injury, while Tom Cleverley (calf), Rio Ferdinand (groin) and Nemanja Vidic (knock) will all hope to be available. Darren Fletcher, meanwhile, has returned to training following 10 months out with a chronic bowel condition.

Stoke come into the fixture on a five-match winless run in the top flight, and drew a blank in their latest encounter with West Brom.

Indeed, Hughes' men have failed to score in their last three Premier League games, but have never gone four without scoring since gaining promotion in 2008.

If Stoke - who have taken just one point from their 10 Premier League meetings with United - manage to pull off an unlikely win on Saturday, it would represent former Manchester City, Fulham and Blackburn boss Hughes' 100th Premier League victory as a manager.

Hughes may be without former United defender Ryan Shawcross who has been unable to train this week through illness, but Geoff Cameron could return from a groin injury.