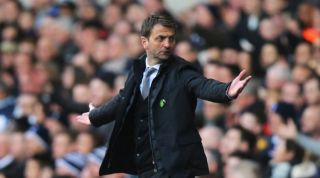 In contrast, opponents Stoke are unbeaten in their last six on home soil and have climbed to 10th with the help of four wins on the bounce at the Britannia Stadium. The Staffordshire club have never won five home games in a row in the Premier League.

Sherwood could be running out of time to impress senior White Hart Lane officials as speculation mounts that he will be replaced at the end of the season, but he will take confidence from the fact that Tottenham claimed a 2-1 victory at the Britannia last term.

In fact, the last five league fixtures to be staged between these sides in Staffordshire have ended 2-1 - Spurs winning three and Stoke two.

But Sherwood should not expect Stoke to roll over this weekend. Mark Hughes' men - 3-0 losers in the reverse fixture - have set their sights on a top-half finish and striker Peter Crouch believes his side could even secure eighth as he prepares to face one of his former clubs.

"It is something that we, as players, are desperate to achieve because we want to progress and move forward and then build upon that in coming years," he told Stoke City Player.

"If we keep winning then there is no limit to it. Ninth is a possibility and even eighth is within our reach too if we can take advantage of the three games we have coming up.

"I always believed that we would finish the season strong, just as the manager did, and we have proven that by picking up a good total of points in recent weeks.

"Hopefully we can build upon that, and add a few more to the tally because there are a lot of objectives that we are hoping to achieve before the season ends."

Stoke will equal their record Premier League points tally (47) with victory in this fixture and are not expected to have to deal with any fresh injury concerns.

Spurs, meanwhile, could welcome Roberto Soldado (hamstring) back to the starting XI after he came off the bench in last weekend's 3-1 win against Fulham.