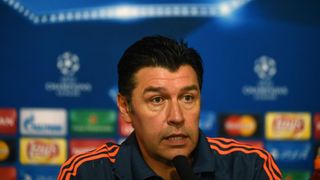 Hubert Fournier is excited by the nature of Lyon's encounter with Zenit in the Champions League, with his team on the brink of elimination.

The French side sit bottom of Group H and will be unable to progress to the last 16 of the tournament if they lose and Valencia beat Gent, while three points for Zenit will send the Russian side through.

High-stake games are something the Lyon coach says he always looks forward to, but believes his side must find balance and avoid errors if they are to keep their campaign alive.

"There is pressure because it's an all-or-nothing match. I like this kind of meeting," Fournier said.

"It will be necessary to find balance in order to avoid Zenit's counter-attack and it will be essential to avoid errors, which we have made in some of our latest games.

"We still have hope of beating this Zenit team, although it will be complicated. We have to give everything."

Fournier confessed to being impressed by the depth of talent at Andre Villas-Boas' disposal and heaped praise on Hulk - who has scored three Champions League goals in as many appearances this season, including a stunner in Zenit's 3-1 victory in the reverse fixture last time out.

The Brazilian sat out the 0-0 draw with Mordovia Saransk at the weekend with a muscular injury but is expected to return for Wednesday's meeting.

"Zenit have world class players. They are able to do great things, particularly Hulk," Fournier added.