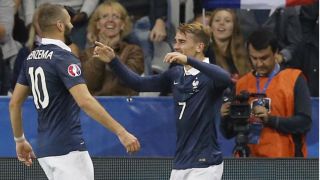 Karim Benzema scored twice and set up another as France continued to build momentum ahead the European Championship on home soil next year with a comprehensive 4-0 friendly win over Armenia in Nice.

Head coach Didier Deschamps had promised not to substitute Benzema, who has found himself being taken off in six out of the last eight matches for Real Madrid so far this term – despite being their top-scorer.

And he duly repaid his manager's faith, netting a quick-fire double late in the second half to put the result beyond all doubt following earlier strikes from Antoine Griezmann and Yohan Cabaye.

Benzema played a key part in Griezmann's opener, combining wonderfully with the Atletico Madrid forward, who broke the deadlock 10 minutes before half-time with his first international goal in 11 months

Cabaye doubled France's lead with a sumptuous effort early in the second half, before Benzema fired in his 26th and 27th international goals in the space of two minutes.

However, the former Lyon man hobbled off in the closing stages – clutching his left hamstring – a potential blow for Les Bleus as they sealed their third consecutive victory in convincing fashion.

France dominated early on, and after Cabaye had gone close with a venomous strike from 18 yards out, Armenia stopper Kasparov had to be alert to keep out Patrice Evra's deflected effort.

For all their early pressure, France should have been behind soon after, but Artur Sarkisov was unable to latch onto Karlen Mkrtchyan's low-cross following slack play from Lassana Diarra – making his first international appearance in five years.

Having being played in brilliantly by Benzema, Griezmann, who missed a penalty in the Madrid derby on Sunday, should have slotted home at the other end shortly before the half-hour mark, but his effort was saved by Kasparov.

Kasparov again did well again a few moments later, getting down low to prevent Benzema netting with a rasping strike from the edge of the area.

However, France finally made their dominance pay in the 35th minute, Griezmann combining once again with Benzema before powering in a venomous finish from close-range.

France extended their lead shortly after the restart, Cabaye finding the bottom-right corner with a curling drive from 20 yards out.

After going agonisingly close on the hour-mark with a clever flick, Benzema finally got his goal when he rose highest to head home from Griezmann's 77th-minute corner.

And he doubled his tally two minutes later, latching onto a pass from substitute Anthony Martial before calmly slotting in.

There was to be one final twist however, as the 27-year-old limped off immediately after with what has been confirmed as a hamstring injury, while Griezmann and substitute Olivier Giroud both went close to grabbing the fifth as Deschamp's men cruised to victory.