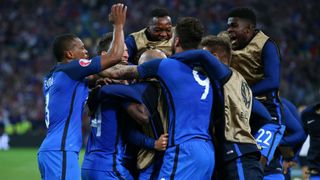 Aime Jacquet believes France's "new generation" will prevail over a Germany side he says are in decline.

The Euro 2016 hosts meet the world champions in the semi-finals on Thursday and Jacquet, who led France to 1998 World Cup glory on home soil, is anticipating a tight match.

Jacquet regards the clash in Marseille as a meeting of two great rivals, but feels his compatriots have the edge.

The 74-year-old told FIFA.com: "They are our eternal rivals. They are a fearsome adversary, but not unbeatable.

"They have a generation coming to the end of its cycle and I hope that, with our new generation, we will be able to come through this test. It will be very difficult.

"I saw Germany against Italy and it was a tight and tactical contest."

Jacquet had Didier Deschamps in his side for his crowning glory 18 years ago and spoke of his admiration for the France boss.

"He knows how to handle things," added Jacquet. "He has all his experience as an exceptional player and a coach at the highest level and a wonderful personal journey with the France team.

"He's been in this situation as a captain with me and I can assure you he's controlling everything perfectly behind closed doors.

"That's another reason why we're lucky to have players who have played across Europe. Didier played in Italy, England and Spain – and what a fantastic collection of trophies he has."

Germany beat France 1-0 on the way to winning the 2014 World Cup, but Mats Hummels – scorer of the decisive goal in that quarter-final – is suspended for this match.