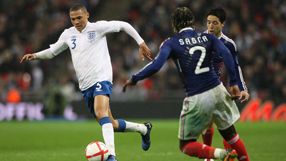 While Fabio Capello's experimental team was outclassed for virtually the entire match, there were some very good English Premier League players on display at Wembley.

The trouble for Capello was they were playing for France.

Full-back Bacary Sagna, who provided the pass for Mathieu Valbuena'a goal which put France 2-0 ahead, and Samir Nasri, who largely ran the match with a brilliant midfield display, both earn their keep playing for Arsenal.

The London club also had two players in the England team - full-back Kieran Gibbs winning only his second cap and the largely anonymous Theo Walcott, who was replaced at half-time after a frustrating night on the right wing.

But the French trio's performances, along with those of the outstanding Yoann Gourcuff and Benzema, continually illustrated the technical gulf in class between the sides.

Arsene Wenger, Arsenal's hugely successful French manager and ideally placed to judge the merits of the two sides, told The Sun newspaper: "It's despairing, the (England) team were without fight.

"As soon as England won the ball back they lost it again. They lost the ball straight away on the first pass. They avoided tackles. There was only one team on the pitch.

"The richness of a country's football is assessed by the depth of its players . When there are five players missing for England you don't see much in reserve to take up the challenge. There were too many players not at the right level to take on this French team."

Former Ireland international Tony Cascarino, writing in The Times, criticised the tactics used by Capello, despite the experimental nature of his team.

Capello gave first starts to striker Andy Carroll and midfielder Jordan Henderson, and instead of starting with his usual 4-4-2 formation, Capello opted to start Carroll as a single front man.

France, like England, are rebuilding their team after a similarly disappointing World Cup but they displayed vastly superior technical ability on a rainy night and a slippery pitch.

While Laurent Blanc's team passed and moved with speed and intelligence, England were largely static and passed poorly and played like 11 individuals who had only just met.

Even allowing that Capello was experimenting - only three of the starting lineup played in their World Cup defeat to Germany which saw them eliminated in the second round -- their tactics looked askew.

This frailty again raises doubts about Capello's ability to create a side good enough to challenge for the European title in 2012 and whether the Italian is still the right man to lead England.

France replaced Raymond Domenech after their World Cup failure, and under Blanc h