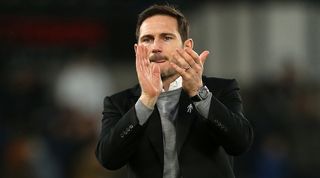 The Derby County boss has emerged as the frontrunner to replace Maurizio Sarri at Stamford Bridge after the Italian joined Juventus on Sunday.

Chelsea are expected to make a formal approach this week.

However, Derby are determined to keep him at Pride Park after the former England midfielder led the Rams to the Championship play-off final in his first season at the helm.

Lampard is understood to have been offered a contract extension by his current employers, while Chelsea could have to fork out as much as £4 million in compensation for a deal to go ahead.

QUIZ! Can you name the 25 most valuable players in the world aged 21 and under?