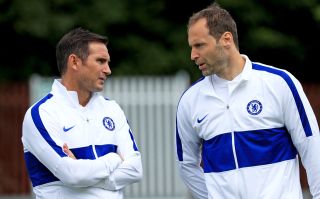 Chelsea have already reaped the rewards of Cech’s role with the captures of Werner and Ziyech and Lampard believes extra fringe benefits will continue to shine through.

“In terms of on the grass and on the training pitch and working with players and all around the game and how we prepare, I feel that’s somewhere where my playing experience helped me a huge amount because I was trying to take things in all the time,” said Lampard.

“But relationships with people upstairs, they are different so I have to say I am very happy to have Petr here because I know him so well, because we get on well, because I trust and value his world and how we speak.

“There is a real honesty about how we work and how we can speak to each other.

“I trust that he’s been a winner and he knows what it takes to win and I think we have something in common over how we have a real desire to get to that.

“So, yeah, it’s felt like a real strength for us this year.

“We will be judged, of course, on results as we move forwards but it will certainly not be for the want of trying that we want to bring success to the club.”

Chelsea face Arsenal at Wembley on Saturday, where seeing off the Gunners and lifting the FA Cup would put the seal on a good first campaign at the helm for Lampard.

The Blues battled to a fourth-place league finish to secure Champions League football for next term and Lampard’s squad revamp is already well under way.

Former Chelsea and England midfielder Lampard does not anticipate any specific meetings with club owner Roman Abramovich this summer but explained that is only because of Granovskaia and Cech’s stewardship.

“I don’t need a phone call or a message or recognition, because my job when we come fourth this year is to think about how we can come higher than fourth next year and close the gap,” said Lampard.

“I feel the support from the owner. I have felt it him from the moment I took the job.

“I felt it for many years as a player. I am happy if I can make him happy. Last Sunday was a step forward in where we are right now and I want to continue making those steps.”

Asked if he expects a summer debrief with Abramovich, Lampard continued: “I wouldn’t expect anything. I have a very close relationship with Marina and with Petr. That relationship has been really good and it’s been a real strength.

“But it feels like a real strength in the camp that I can speak to Petr regularly.

“I can speak with Marina and work in a joined-up way in taking the club forward.

“All of that will come through the owner, it’s his club. We work towards the aims that we know and the standards of this club.

“I am a big boy. I am in this job and I know that there are demands. I would always be ready to take any call or have any meeting because this is my life and I am obsessed with how I can get this club to where it wants to be.

“But I don’t need those calls. But I’ll be there if they are to be had.”